There are times when ‘telling it straight’ to use a metaphor, just doesn’t cut the mustard!

Sometimes we want to get a message across without naming the elephant in the room (apologies for the abundance of metaphors I might use in this post 🙂 ) because the nature of the subject is delicate, sometimes we sense that just ‘telling it as it is’ might cause offence or come across as insensitive and that’s where metaphor can come in and save the day.

The word metaphor comes from the Greek ‘metaphora’ – ‘to carry over’ and in its simplest form is a comparison between 2 things that share common characteristics. There are many forms of metaphor, for example simple metaphors such as “the whole situation was a storm in a teacup” or “her velvet voice caressed the souls of the audience” or primary metaphors such as “time is money” and “if music be the food of love”.

Today I want to share with you the memorable magic of extended metaphor where we look to convey a message using something different but with a similar comparison.

Why use a metaphor when the truth speaks too? Let’s look first to our brain to answer that question. 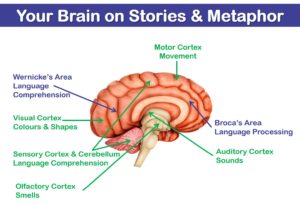 When we listen to facts and data there 2 key parts of our brain involved (in blue on the image) that have the role of receiving, processing and decoding the language and data. Both of these parts are found in the left hemisphere which has a preference for logic (the whole left brain right brain theory is complex and worthy of a separate blog).

When we offer our message in the form of a metaphor or story however we have a neural party (blue and green)! Every one of our sensory cortices is activated as we listen to the language and create our own sensory experience depending on the language being used. Our motor cortex is also activated so whilst we hear facts and data, we experience metaphor and story and with our whole brain.

Our visual cortex is by far the largest of our sensory cortices so when we offer a message in the form of story or metaphor, we can fully engage with it and ‘see’ or imagine what’s going on. This is of particular importance because when we create visual images they act like sticky post-it notes for our memory and are remembered for far longer and more deeply than facts and figures alone.

Here’s a quick test – as you read out these simple metaphors what images are you seeing?

Let me give you an example of an extended metaphor in action. I was contacted by a trainer and facilitator who used my metaphor creation process to work with a team that was undergoing considerable challenges, was dysfunctional and were about to lynch their leader. Alice decided to use the metaphor of a runaway train and presented this concept to the team opening with a story. The team members immediately picked up on the metaphor citing that they’d prefer to put the whole management team in a separate carriage and uncouple it!

Alice had her work cut out.

What then ensued was a respectful dialogue on how to get everyone ‘on board’ and invite the management team back into the carriage. The team members felt comfortable using the language of the train metaphor and as the conversation continued, guided by Alice’s expert facilitation, they were able to carry over (metaphora) to the real issue and leave the train analogies behind.

I would love to hear from you how you use metaphors to get your message across and become more memorable and magical!

A Sprinkling of Magic Blog